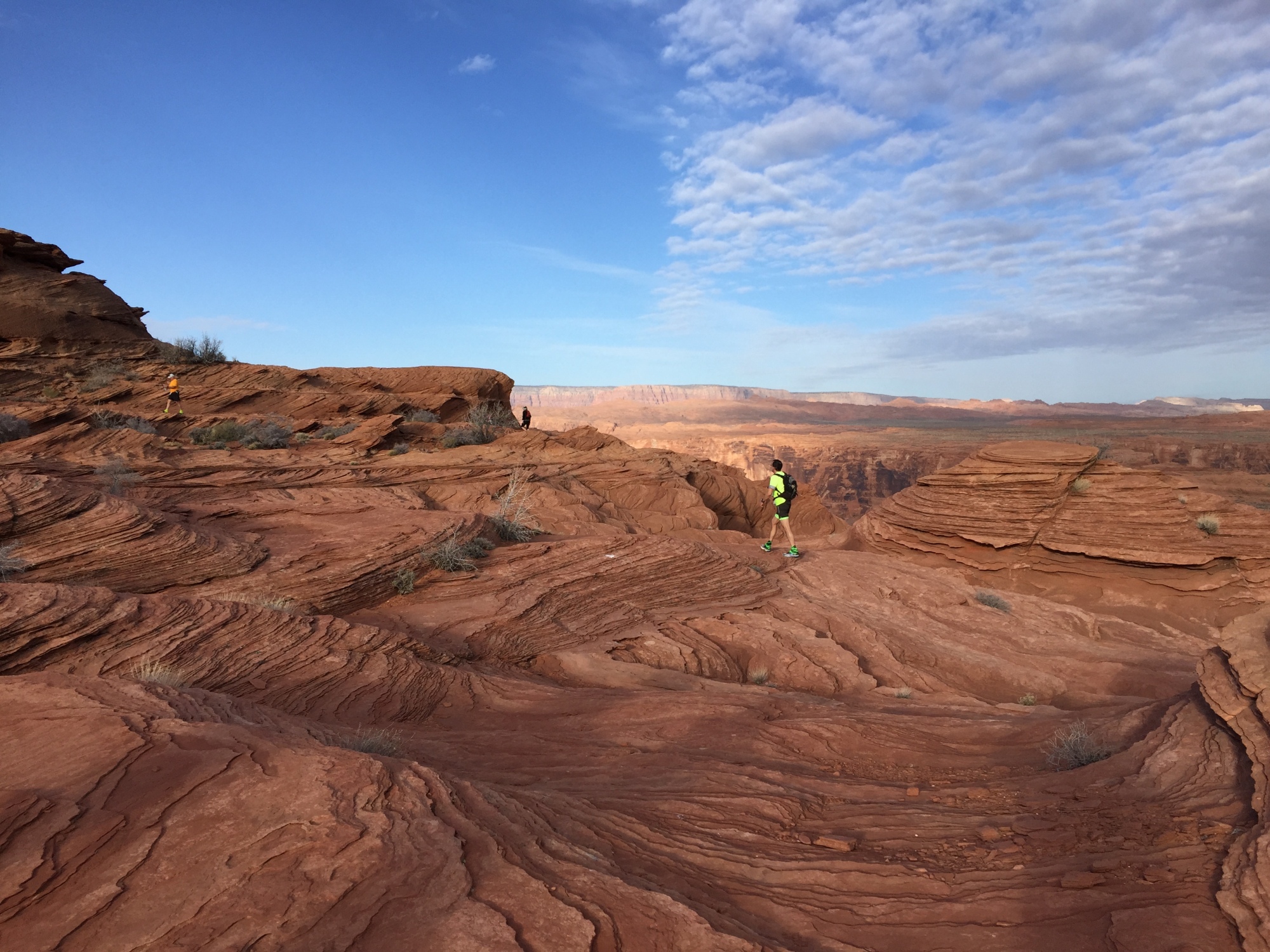 Coming off my race at the San Diego 50 I was feeling good about getting back out on the trails and putting in miles … which is why I was so excited to head to Page, Arizona, for Ultra Adventure’s Antelope Canyon 55K last weekend.

Well, that was one of the reasons.

The other was to experience first-hand the much-talked-about scenery of the course!

I opted to drive and left San Diego bright and early, at 4 a.m., and arrived in Page around 3:30 p.m. Not a bad drive at all; pretty scenic in parts, actually.

The first thing I wanted to do is complete one of the Trifecta Challenges. The Trifectas are a really cool thing Race Director Matt Gunn has put together. Realizing that these are destination races for many runners, he put together a list of “other must-see areas” while they are in town for their race. In addition to seeing more of the area, runners who participate in the Trifecta are eligible to receive discounts on future races. MORE trails and money off race registrations? No complaints here!

I was most interested in The Cable Trail, which, if followed all the way down, will take you to the Colorado River. Since I was traveling alone, I felt like going halfway down was good enough; I didn’t drive 600 miles to spend race day stuck at the bottom! Definitely an amazing trail.

I got to the staging area at 6:15 a.m., got prepped and headed to the starting line. Matt gave a quick pre-race briefing, which included a moment of silence for a fellow runner’s daughter who was tragically killed in a car accident last year. In addition to the moment of silence, purple bracelets were available for runners who wanted to run for Alyssa and her family. I was one of them.

Once the briefing wrapped up, it was time to get busy. The 55K runners were off at 7 a.m. sharp.

The first loop took us out through the desert toward the much-anticipated Horseshoe Bend and Waterholes slot canyon. The first thing I said after taking off was “wow, the scenery out here is going to be amazing,” followed abruptly a few miles later by “wow, this sand is going to make for an incredibly hard run.”

It most certainly did.

Since I’m making a more concerted effort to not waste too much time at aid stations this year, I went straight through Horseshoe Bend aid (mile 5) and continued on toward the river.

Standing over Horseshoe Bend was one of the most surreal moments I’ve ever experienced. Billed as one of the most photographed land features in the country, I definitely added to the picture count by snapping 20-30 pictures on my iPhone.

Once I picked up my jaw from the ground, I continued on my way.

One thing that quickly became apparent was the fact that you’d be running on a wide variety of terrain. Running on the slickrock overlooking the river was an awesome experience – but one where I had to stay pretty aware of where my feet were landing so not to injure myself.

All went well and I hit Waterholes Aid with no issues before dropping into Waterholes slot canyon.

Runners were pretty spread out by this point, which allowed me to experience Waterholes slot canyon alone. It was an awesome experience. I’d like to try and capture it in words, but I think pictures tell the story better:

Once out of Waterholes it was some fire road, followed by a quick pass back through Horseshoe Bend aid, before heading back toward the staging area. The first “loop” was about 23-ish miles.

The 55K finished up with a lap on the Page Rim Trail, a 10-mile loop of scenic singletrack that encircles the city of Page and gives runners amazing views of Lake Powell and the surrounding area.

I crossed the finish line in 8:26, somewhere in the middle of the pack. I was definitely happy with the effort and think that I’m improving each and every day.

Finishers’ awards for the 55K were handcrafted pieces of pottery that were each unique – and way cooler than a medal (in my opinion). I also really liked how you got to pick your own award based on which one spoke to you the most.

But I was given so much more than a finisher’s award. Antelope Canyon gave me the opportunity to run through some of the most memorable and breathtaking scenery in the country, and to do it in support of a fellow runner who had experienced a significant loss. Thinking of him and his family throughout the day really put life into perspective for me.

It should be noted that the runner who lost his daughter committed to running the Antelope Canyon 100-mile race in her memory. It was his first 100-miler. He finished strong and I’m sure his daughter is incredibly proud.

A week has passed since the race, and I’m still replaying a lot of it in my mind. I’ve also had some time to think more about the event and here’s what I came up with:

My experience at Antelope Canyon confirmed one thing: I need to run more of these events to see more of the The Grand Circle. But I won’t have to wait too long; I’ve got two more UA races on my calendar, Monument Valley and Zion.

Zion will be my second attempt at the 100-mile distance … and I can’t wait.