“There is something primitive about running from the desert to the mountains.” – Ben Hian, Lost Boys 50 course record holder.

Ever since I moved to San Diego and started running ultras, I wanted to run the Lost Boys 50. I had heard so much about this race and its long, checkered history that I knew I had to experience it for myself. Last weekend, I got that chance.

C and I—and my parents—arrived in Julian the Friday before the race. My parents had flown out from Iowa to see me run, so I was extra excited about that. We had a great dinner at Romano’s before retiring to our cabin for the night (Note: If you’re running a race in the Anza Borrego/Cuyamaca/Mt. Laguna area and want a good Italian, pre-race meal, this is the place).

We were up early since I had to be at Lake Cuyamaca to catch the 3:30 a.m. shuttle down to the desert. Once on the bus and heading down I began to hope the weather would hold up for what was sure to be an epic race day.

As the runners piled out of the shuttle, we quickly realized we were going to be in for a windy, WINDY day. But it wasn’t raining, so we had that going for us.

After checking in and hiding from the wind back on the buses, it was time to go. Runners huddled around Race Director Brian Gonzales to get a quick history lesson on the race before heading out into the still-dark desert. Just like that, we were off.

The race wasted no time accumulating the 9K of elevation gain runners were promised, with the first 10 miles of the course gaining almost 3K. I ran into my friend Carlos, and we took it easy together the first 5 miles, catching up on life and things since we hadn’t seen each other in awhile.

After hitting Boulders Aid (5.1), Carlos took off and I settled in for the day. I was really excited about the first 20 miles of the course, since I’d never ran in that area before. The miles didn’t disappoint. Runners ran through desert canyons, scurried over boulders, came across abandoned mines, and more. It was amazing. 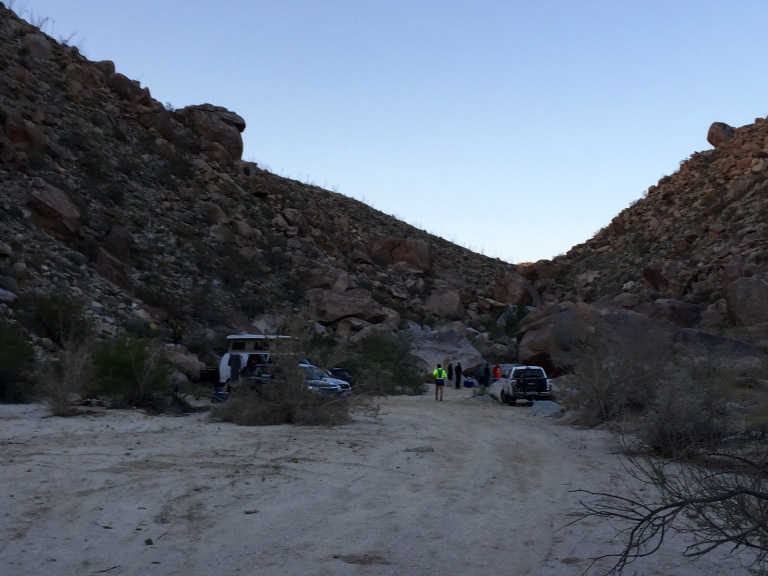 I hit Pinyon Mountain Valley Aid (12.4) right on time. I was in/out of the aid station in less than 3 minutes and was off toward Blair Valley, the first place I’d be able to see C and my parents. The next few miles were a slow steady decline where I just zoned out, enjoyed the desert views and began thinking about how I wanted to tackle Oriflamme Canyon.

I got into Blair Valley Aid at about 9:15 a.m., and was met immediately by C and my parents. I could tell my parents were getting into crewing and were having a great time already. I was so glad they were getting the opportunity to experience the sport I love first hand. After refueling, and chatting with them a bit I was off.

Before I knew it I was back at the mouth of Oriflamme Canyon. It had been a few years since I’d ran through the canyon, but I still knew it was going to be brutal. I settled into low gear and started the long grind to the top. On the way up I reflected on just how far I’ve come in my training in only a few short years. 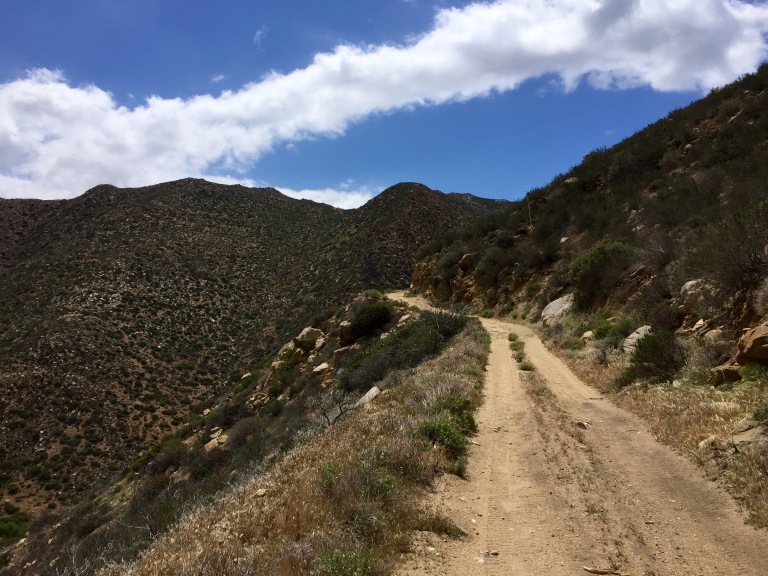 I got out of the canyon with no major issues and after a short run across the meadow, I arrived at Pedro Fages, right on schedule.

Though I was on my goal time, I was tired. The constant battling of the wind and slow steady climbing was really taking it out of me. I took some time to reload my pack, refuel on soup, and get rejuvenated by wiping myself down with a Pro Energy Towel. A few minutes later, I was out and heading toward West Mesa aid station feeling great.

The forecast had called for rain and we’d been lucky enough to dodge it all day … but one look at the sky and I knew it was only a matter of time, so I picked it up a bit.

By the time I got to West Mesa aid (36.1) I was actually ahead of my goal time. There was one climb left, the climb up to Cuyamaca Peak. I wasted no time getting started.

I was pretty wiped out by this point. The more I ascended, the more I was climbing up and into a foggy/cloudy oblivion. By this point runners were very spread out, so at times it almost felt like you were in a dream … or a horror movie.

Regardless, I was in the zone and cruising. Apparently cruising a bit too well, as I blew right by a very well-marked junction and ended up off course for awhile. It was a minor mental blow, but I couldn’t help but laugh when I retraced my steps back to the junction. It was so well marked!

I finally got to Cuyamaca Peak aid station (42.9) dropped my pack, grabbed a grilled cheese and cup of soup and started the short out-and-back climb to the peak, before looping back through CP aid, grabbing my pack, and beginning my descent.

As I started my descent I was mentally prepared to just run it down and into Cuyamaca Lake, but as I started coming down I replayed what one of the aid station volunteers at CP aid had said “you have mostly down left, than just a little up before you get to the finish.”

Immediately it hit me; we’re going up over Middle Peak!

The same thing happened in last year’s San Diego 100, where I somehow completely spaced on the fact that both races hit Middle Peak before returning to the start. Needless to say, I got one more “nice little climb” in before I hopped on the Sugar Pine Trail and began my (real) final descent.

I crossed the finish line in 13:28, and couldn’t have been happier. All things considered, it was my strongest ultramarathon finish to date.

This race blew me away on so many levels. Running from the desert (at 1,000 feet), to the mountains (almost 7,000 feet), made for an unforgettable day of constantly changing scenery. The aid stations were so well stocked and staffed it was unbelievable. In fact, I found out later there were about 60 runners who started the race…and almost 60 volunteers helping them out.

There was something else that played a significant role in my strongest finish to date, a new training device I have been using called GoMore. Stay tuned for a detailed post on my experience with the product—and how it has helped redefine the way I train.

The Lost Boys 50 was my final tune-up before returning to the San Diego 100 this June. My record with the SD100 is tied at 1-1. Depending on how the final weeks of training go will determine if I take on this year’s race solo or supported.

2 thoughts on “Blown Away: The Lost Boys 50 Mile Ultramarathon”